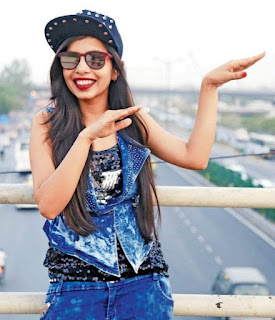 Dhinchak Pooja whose real name is Pooja Jain is one of the most hated Indian singers with millions of likes on her YouTube channel within a short span of time. She doesn't have that gifted melody in her voice but still managed to achieve that confidence to sing in front of the mass. And it is nothing but her confidence which led her to become popular as a singer. Pooja who calls herself as "hashtag super girl" and a huge admirer of Jennifer Lopez and Rihanna is rumored to appear in "Big Boss Season 11".
Dhinchak Pooja Early Life And Background
Dhinchak Pooja was born on 16th December 1992 in Uttar Pradesh and also brought up here. She is a bachelor degree holder in Arts. She is currently residing in Delhi.
Pooja who is one of the most hated singer on YouTube channel with her three most video song Swag Wali Topi (2015), Daaru (2016), Selfie Maine Leli Aaj (2017) have received extreme hate and more than a million hits, also Dilon Ka Shooter had received 8,00,000 hits by the first week of July 2017. Her Youtube channel that had hit over 2 lakhs subscribers was populated with 12 videos. Most of them were deleted because of Kathappa Singh's complaint on over copyright issue. She was reported to Delhi police for not wearing a helmet while riding a scooter in one of her videos. Infamous singer Sonu Nigam also uploaded a video of the song called "Dilon ka scooter" just to present his sarcasm upon the song and also revealed that how much her song was being hated by people.
Dhinchak Pooja Boyfriend/Dating
Pooja is not dating anyone or neither she is sharing a relationship with anyone. We will update it as we get any information of relevance. So stay updated with us.