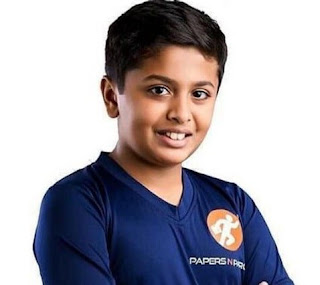 Tilak Mehta Entrepreneur:  Tilak Mehta is one of those young entrepreneurs, who made of the country proud with his remarkable initiative, by launching an Ap based courier named Paper n Parcels service in Mumbai (India) with the collaboration of Dabbawalas (One who carries and deliver Tiffin boxes across Mumbai region of India). His young mind nurtured this unique idea into the reality with the help of his Uncle Ghanashyam Parekh (Ex-banker), who is the current CEO of the company. Ghanashyam did a lot of research and found the startup feasible, thus, decided to quit his job and jumped into this to make it a reality. The mastermind is currently a 13 years old young kid, who's studying in school on his weekdays, and work in his company on his weekends. He used to do regular meetings with his colleagues and take their feedback to improve the services better. The primary motto of the company is to ensure the same day delivery of their goods within the Mumbai region. You guys can Click Here to download the App from Google Play Store.

Tilak Mehta is a 13 year Mumbai boy, studying in Class VIII of a suburban school named "Garodia International School in Mumbai, Ghatkopar". His father Vishal Mehta is also associated with a logistic based company. Tilak has a twin sister Tanvi and mother Kajal Mehta, a homemaker. He recently wins the "Young entrepreneur title at the India Maritime Awards in 2018". It was 2017, when the young genius forgot some of his books to his Uncle's place, and need them urgently on the day when he sat for his studies. He needed them badly but no one was there to get them up. His father, who was arrived on late night, that day, was tired of his entire day works was not in a position to get them from the end of the city. This was the turning point from where this idea flourished inside the young mind that why not to come up with service across the city, that could ensure the same day delivery of the goods.

The idea was to carry the papers and small goods across the city and guarantee the intraday delivery of the same. He discussed the idea with his father. Being a chief executive officer of the Sealink logistic company, his father was the best person to help him with his idea. He listened to it carefully and decided to put a real shape to it. The idea was initially actioned for 4 months as a Beta, then the final implementation was put into action with the collaboration of Mumbai based Dabbawalas.

Read out the statement of Young Genius about his idea

“I was thinking about this for days and when I saw a dabbawala in my building, the idea for Papers N Parcel struck. I always marvelled at the swiftness and the efficiency of the dabbawala’s food delivery network, and I wondered if the network could be used to allow deliveries of even non-food items,”.

In another interview, 13 years boy also told to the media persons that "Papers N Parcels is my dream and I will work to ensure that the business becomes big,”.

PNP is entirely an App based logistic service with an employee strength of more than 200 along with over 300 Dabbawala partners. Currently, the customer can order for the deliveries upto 3 kilos with a charge between the range of 40 to 180 INR.

As per Ghanashyam Parekh - They have a client base covering Pathology labs, boutique shops and brokerage which will grow with our formal launch.