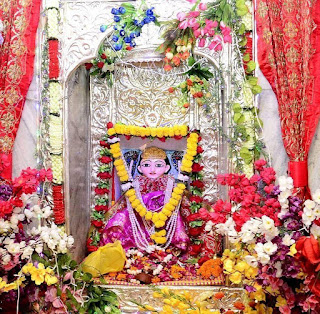 India is a holy land of fairs and festivals. Thousands of such events are celebrated in form of sacred gatherings and with different rituals. Such is a fair celebrated on Anant Chodas in Jalandhar, state Punjab. More than one and half million devotees mark their presence for paying obeisance to an immortal legend named Baba Sodal. People from all religion creed and cast attend the festivities with full and show in pursuit of justifying the fulfilled blessings at this holy place.
It is assumed that woman used a pound of water for meeting domestic requirements like washing cloths and so on. The holy mother of legendary Baba Sodal (in his early childhood) accompanied her son to pound. The child started playing mischives by making clay balls and throwing at her mother. When utterly disturbed, mother cursed the son badly. Baba Sodal made her mother repeat the rebuking words and then in pursuit of obeying her he jumped into the pound and never reappeared. By hearing hue and cry of mother people gathered. After Relentless search there was no sign of the boy.
It is said that the child appeared in the form of holy snake and declared his farewell from this mortal world. He also demanded his reincarnation should be accepted by Chadha and Anand families and should be offered Mathi (local flour made snake) called “Topa”. Baba ji declared that he is descendents from Chadha clan. So his part of “Topa” weighing two and quarter ‘Ser’(an old measurement unit) and for each Chadha boy half ‘Ser’. He further said “topa” should be weight against each member of bachelor brahmin’s family. It can be consumed only by members of Chadha clan, even their son in laws not allowed to have the share of “Topa”. On Amawasya ( no moon night) before Sodal fair head of Chadha clan visits the pond and extracts clay fourteen times for his each son. This means to make Baba Ji appear on the day of Tryodashi (13th of local month). Every member pays his obeisence to Sodal Baba , Kasar (kneading of simple flour) is made and offered forteen times gradually in parts. On Chaturdashi (14th of local month) all members of Chadha clan eat only fried food especially made from a traditional fry pan. Eight days ahead of this festival all members of Chadha clan sow ‘Kheti’ on the name of Baba Ji which means the more prosper the sow, happier and richer will be the family.
There are few other things worth mentioning:
1.) Mundan ceremony (1st ceremonial hair cut according to Hindu Religon) of each Chada boy is conducted on 2nd Navratra when the boy is 3 years old.
2.) Till completion of all marriage rituals off Chadha groom, it is mandatory for bride to stay with Baba ji’s holy Sandals , then only she is accepted as a new member of family. These all declarations are made by Baba Ji himself. He further announced that he will continue to be offered prayers even during crisis in the family. Otherwise he would remind the disobedience by appearing in their dreams in the form of a snake. If disobeyed whole clan will be endangered with these words Baba ji disappeared in the pond. Ever since people from distant places visit the holy site every year to offer their prayers.